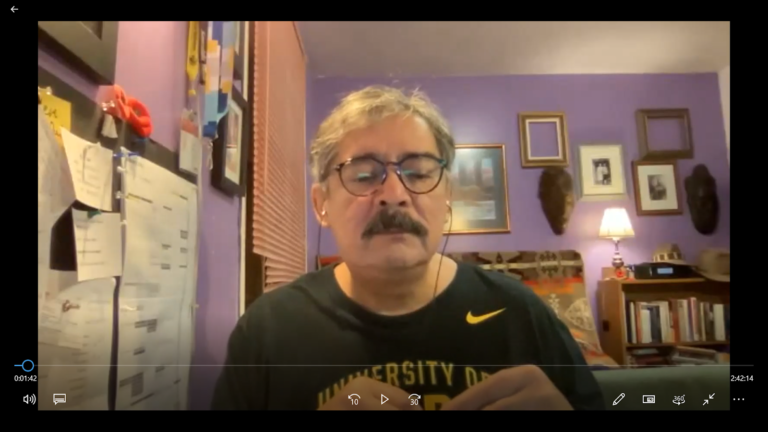 Dan David is an award-winning journalist and the first head of news at Aboriginal Peoples’ Television Network. Since January 2021, he has been working with JHR as an expert trainer to support the capacity-building of local journalists in Kenya. Dan brings a wealth of knowledge and a unique perspective to the role. Next week will mark the end of Dan’s assignment with JHR and we would like to profile him as a way to thank him for his notable contributions to the Canada World: Voice for Women and Girls project. (His lifetime of dedicated service to journalism also was just recognized with the Canadian Journalism Foundation’s Lifetime Achievement Award for 2021.)

1.Tell us a little about yourself, your professional background, and your areas of interest.

I’m Kanienke:haka (Mohawk in your language), bear clan, born in Syracuse (NY) and raised at Kanehsatà:ke (formerly known as the Oka Reserve) west of Montreal. I’m the son and grandson of proud, stubborn people who made a habit of standing up against wrongs done to them, their community, their nation, and their people. They also stood up for anyone whose human rights had been violated regardless of color, creed, or nationality. I grew up enveloped in the warmth of books, newspapers, magazines, and dangerous ideas. Despite this, my early adult years were filled with the struggle to overcome ugly stereotypes about “native people” imposed by the outside world- until journalism found me.

After graduating high school, discouraged by government officials from pursuing journalism school, I furthered my education by working with people who lived life; I dug ditches, painted houses, was on a garbage truck, studied with tree and construction crews as a laborer, learned photography and became an offset printer before eventually becoming the print shop manager. After a thankfully short time as a federal civil servant at Indian Affairs, I took an intensive course in journalism, was hired right after graduation, and began a life of telling stories to whoever would listen or read my words.

I have worked across Canada at CBC in radio and TV news as a reporter and editor, as a producer at TVOntario, a provincial education channel, and VISION TV, an ecumenical network, before becoming the Chair of Diversity and radio instructor at Ryerson University’s School of Journalism. Already an experienced broadcast journalism trainer, I was hand-picked by South African journalists to be part of a team of CBC trainers to help transform the South African Broadcasting Corporation (SABC) from state-run into a public broadcaster before the first democratic elections in that country.

That began a 10-year summertime love affair with South Africa topped off by a one-year stint as head of TV training at the Institute for the Advancement of Journalism in Johannesburg founded by Hugh Lewin, Alistair Sparks, and Donald Woods.

Upon my return to Canada, I helped build a national news network at the Aboriginal Peoples Television Network (APTN). Since then, I’ve worked in Indonesia, Denmark, Norway, and Azerbaijan as a journalism trainer or communications officer.

I worked somewhere in there as a researcher/writer on one provincial justice inquiry and one royal commission, both examining Canada’s broken relationship with Indigenous peoples.

Some of my writing has been published in the Toronto Star, the Globe and Mail, Now weekly, THIS Magazine, the Montreal Gazette, the Montreal Review of Books, CBC Online, Open Canada,

I’ve earned two National Magazine awards, the Duke and Duchess of Wessex Award for Aboriginal Literature, and a Starblanket awarded by APTN in 2018. This last award is the one I prize most as it comes from my fellow Indigenous journalists at the network that I helped build.

I want to be a real writer, a writer of literary fiction when I grow up.

2.What led you to want to work with JHR?

In JHR’s early years, I was initially suspicious, fearful it might be yet another group using Indigenous peoples’ lives as training material for non-indigenous student journalists. JHR dispelled those old suspicions with its proven track record of developing Indigenous peoples in human rights journalism, telling their own stories and in their own voices. When asked earlier this year to represent APTN as part of a JHR training team, I replied “Yes” without hesitation or reservation.

3.What did you like the most about your work with JHR?

I like the hard work, excellence, and professionalism exhibited by my fellow trainers here in Canada and those based in Kenya. My part is minor compared to the roles and responsibilities carried out by the rest of Team Kenya. I love the passion and commitment that I’ve been blessed with in the trainees and mentees. I have said too many times to count that I am constantly energized and gratified by the journalists we work with as trainers. It is a cliché but it is nonetheless true that as trainers we learn more than we can ever teach them about this profession called journalism.