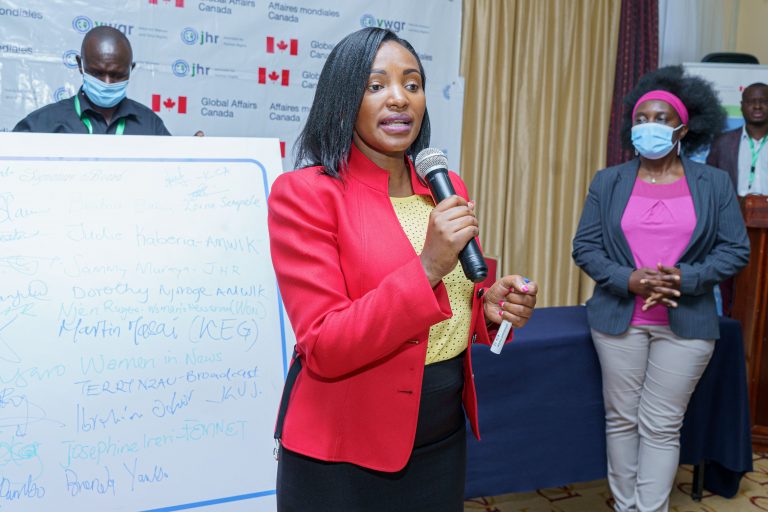 The new policy will help make newsrooms and the field a safer place for women.

Journalists for Human Rights, in partnership with the Kenya Media Sector Working Group, has launched a committee mandated to address sexual harassment in the Kenya media. As one of its first major undertakings, the committee has introduced a model sexual harassment policy for the industry.

The launch of both initiatives was announced at JHR Kenya’s annual Human Rights Media Conference and Awards, held on December 9-10, 2021. The initiative is led by the Association of Media Women in Kenya (AMWIK), while other committee members include Kenya Editors Guild, Kenya Union of Journalists, FIDA, Article 19 East Africa, Kenya Correspondent Association, IREX and Federation of Kenya Employers.

The committee’s core mandate is to encourage the Kenya media industry to promote a gender-inclusive culture in newsrooms, for which sexual harassment and other related policies are being introduced. The committee will also train newsrooms on these policies to ensure their effective implementation. 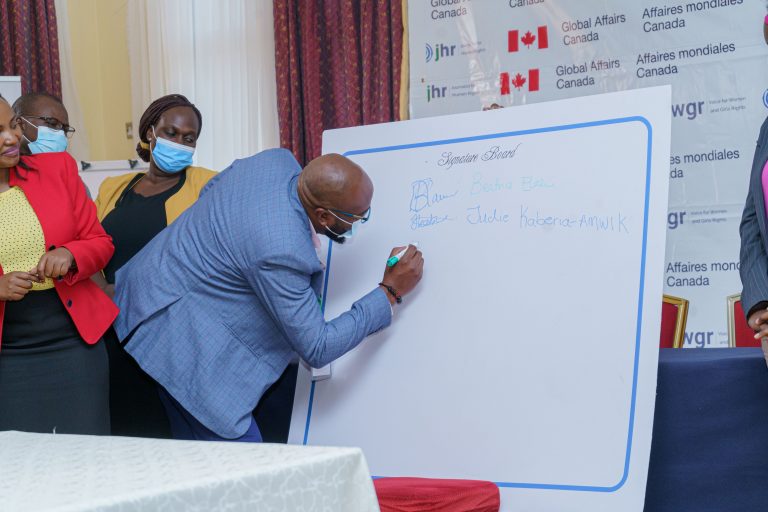 Members of the newly formed committee sign a statement of commitment

for ending sexual harassment in the Kenya media industry

Recent research conducted on the issue showed the high prevalence rate of gender-based violence in the Kenyan media. The survey indicated that 77.5% of female journalists compared to  29.7% of their male counterparts in Kenya have experienced sexual harassment in the newsroom.

JHR’s Canada World project has long been engaging the media industry to find a lasting solution to the pervasive issue of sexual harassment in newsrooms and the field. In March, JHR and AMWIK presented findings and recommendations at the Kenya Media Sector Working Group annual meeting around the issue. The August body unanimously acknowledged that sexual harassment is a problem that needs to be addressed within the industry.  The industry leaders also agreed that JHR should continue to support the industry with both expertise and resources to develop anti-sexual harassment policies within their newsrooms and training journalists on the same policies.

JHR’s Kenya Gender Lead Winnie Syombua describes the launch of the committee and a model anti-sexual harassment policy as a win: “The signing of the mandate signifies the deliberate intention by the concerned parties to commit to ending sexual harassment in the sector. It is an indicator that beyond institutions and organizational labels, they care more broadly about the welfare of female journalists and are willing to explore all possible avenues to ensure comfort at the workplace. At a personal level, it is a win. Having started the conversation on addressing sexual harassment barely one year ago, it gives me the joy to know that we have had a positive impact in such a short time and I know more will be done in the coming years.”

Speaking on the acknowledgement of the media industry leaders and the collaboration with JHR, Judie Kaberia further said, “I can confirm that the members of this committee have committed to serve by signing letters of commitment which they have shared with us. Without partners like Journalists for Human Rights, we would not be here today launching the Anti-SH Committee and Model SH Policy. Thank you JHR for walking the talk.”