In Kenya, journalism has been key to supporting women during the pandemic 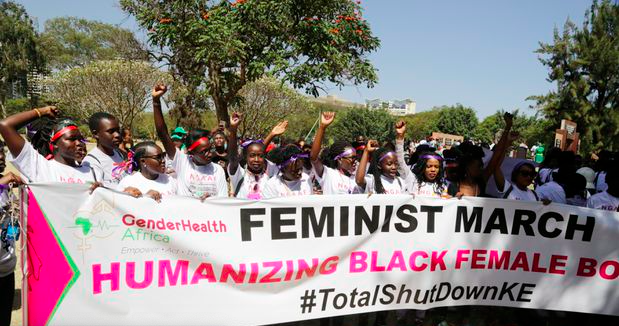 I was writing a story on human trafficking when Kenya announced its first cases of COVID-19. As the news sent shockwaves across the country, I focused on a group of women who had been found stashed in a tiny room in Nairobi’s populous Dandora Slum; a trafficking agent had locked them up before fleeing, forcing the women to sleep on the floor for days without food or other basic needs. They didn’t have travel documents, yet they had been promised jobs in the Middle East. Luckily, police rescued all 29 women, but a puzzle remained: How would they return home amidst the pandemic’s travel restrictions?

Days later, I received a disturbing call from a rescue centre, which told me that it was overwhelmed by an unprecedented number of survivors of gender-based violence. They were girls aged below 16 – some as young as six – and the majority of them had been sexually assaulted. I still remember meeting one girl at the centre who had just turned 12; she was nine months pregnant at the time. “I am so afraid of giving birth,” she told me, and that ripped my heart out. Her innocence spoke volumes of the grave violation she suffered from a man she called “uncle.”

Now, months into the pandemic, stories of rape are tragically no longer shocking. Despite the alarming situation, the Kenyan government has delayed classifying service providers handling gender-based violence as “essential,” and this has hampered efforts to report violations, investigate and prosecute the perpetrators.

Not having adequate rescue centres was the double tragedy. All the centres I visited were stretched beyond capacity. Some survivors were stuck with their perpetrators. A nurse in Kisumu took a six-year-old girl to her own home after treating her because there was no available shelter, and she couldn’t allow her go back to her father who had defiled her.

In the face of such overwhelming misery, I felt the need to go beyond my role as a journalist. My goal became to urge the duty bearers, policy makers and relevant stakeholders to action. When I wrote a piece expressing concerns over the looming risk of contracting coronavirus for trafficked people with disabilities living on the streets, civil society organizations, philanthropists and government agencies responded. We distributed masks, hand sanitizers, food and cash relief to vulnerable groups of women and girls with disabilities, and without. We organized outreach activities to create awareness of human trafficking, online grooming and the recruitment of young girls to participate in orgies. Further, my report on the lack of shelters for victims of human trafficking sparked a major reaction from Kenya’s labour ministry, and they asked me to advise them on how best to change the situation.

I am happy with the effect of my work, but emotionally I am drained. The harm caused to survivors of gender-based violence is grave. The novel coronavirus has reversed so many of the gains made to achieve gender parity. In Kenya, tens of thousands of school-going girls are no longer in school. Instead, they are stuck in forced marriages, working to provide for their babies or enduring further violations. The majority of them will never get justice, giving perpetrators the leeway to continue.

The media is integral to the response against gender-based violence. Journalists can lead by reporting and raising awareness to help change perceptions and policy and to demand justice in order to restore the dignity of the survivors. They should be empowered with skills and knowledge to help them report on gender professionally and with sensitivity. It is in this vein that Journalists for Human Rights’ Kenya project has trained more than 200 journalists and journalism students on human rights, rights media and gender-sensitive reporting.

The challenges that the pandemic represents for women and girls are grave. To meet them requires journalism that looks at the broader spectrum of issues that block girls and women from an equal share of public participation in social, political and economic spheres.

This International Women’s Day, my mind goes to Burkina Faso independence leader Thomas Sankara’s memorable words: “There’s no true social revolution without the liberation of women. May my eyes never see and my feet never take me to a society where half the people are held in silence. I hear the roar of women’s silence.” Working to give these women and girls the platform and attention they deserve is the best way I know to break it.