From Edmonton to Amman: A mission to exchange knowledge and shed light on human rights issues

From Edmonton to Amman: A mission to exchange knowledge and shed light on human rights issues

Sarah was in Jordan to engage with journalists at Ro’ya TV as part of JHR’s expert trainer program with CTV News.

I’m halfway around the world but feel right at home.

In a story meeting with four journalists from Roya TV, Jordan’s number one TV station, I couldn’t help but be inspired. Their ideas. Their enthusiasm. Their passion for my passion—journalism. It was all the perfect antidote to jet lag.

I’m here in Amman with Journalists for Human Rights, a Toronto-based not for profit CTV has been partnering with for nearly a decade. My purpose is to mentor these journalists to report objectively and effectively on human rights issues. And over the next 2.5 weeks, I’m going to lead workshops and coach each of them to produce a  story.

While I travelled here alone, I packed the work of my CTV News colleagues in my suitcase. My PowerPoint presentation for my first workshop includes stories by Jill Macyshon about Canada’s First Nations housing crisis, a story by Lisa Laflamme about the dire situation refugees faced while living in camps during the war in Afghanistan. I also have a live hit Bill Fortier did during the Fort McMurray wildfires and creative stand ups (when you see the reporter on-camera) from Dan Grummet and Jeremy Thompson.

As I show these examples, I can see their eyes light up. This is what happens when you’re exposed to a new idea. A new approach perhaps. I learn through our discussion that a standard TV story produced by Roya is usually about three minutes long but ours are much shorter—a minute forty seconds. One journalist tells me he’d like his stories to be shorter from now on. 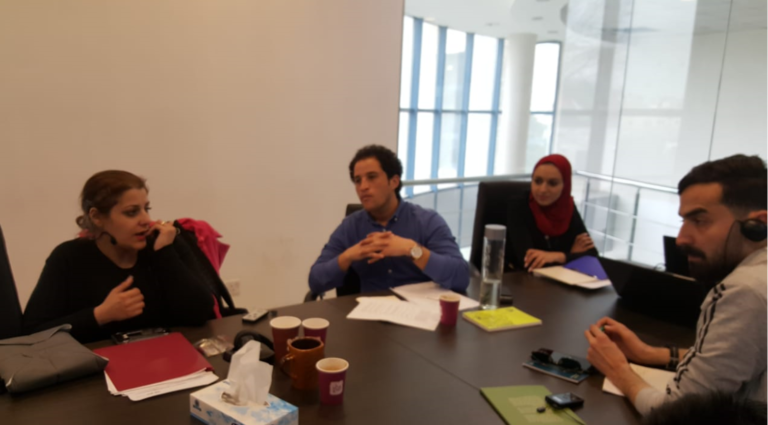 All of this discussion is happening as others in the newsroom rush off to press conferences on COVID-19. Jordan announced its first case last week. It was a man who flew back from Italy and the Ministry of Health says he’s recovering. Meanwhile more than 270 people have been quarantined and cleared and dozens more are in quarantine. New hospital rooms have been built, and borders are being closed.

On Tuesday Jordan closed its border crossing with Israel, the West Bank. It also banned overland travel from Iraq and shut Egypt out of its seaports. Travel is also barred to Lebanon and Syria (except commercial trucks) and as of Monday, people cannot go to or from France, Germany and Spain. This, on top of a previous move to ban travellers from Iran, China, Italy, and South Korea.

In a country where tourism generates a significant chunk of the revenue, Jordan’s effort to protect itself will no doubt hurt its economy. The ancient city of Petra, a UNESCO World Heritage Site, draws hundreds of thousands of people each year. While the Minister of tourism hasn’t yet said how COVID-19 has impacted tourism, the boutique hotel I’m staying at in Amman says compared to this time last year, she’s making 50% less revenue. On my connecting flight here through Vienna (JHR rerouted me to avoid Germany because of COVID-19), I had a whole row of seats to myself. And all of this happened before Tuesday’s announcement.

While my mission here is to help these journalists however I can, it has quickly become obvious to me they will also teach me a lot. While discussing ethics and story ideas I was struck by the barriers these journalists face. We spoke of the red lines that cannot be crossed. Authorities will sometimes ban a journalist’s access if they report something they did not like, which can lead to self-censorship. It is a crime to post what is considered “fake news” and to criticize the King. It wasn’t until after the Arab Spring in 2011 that people could protest or hold a public meeting without permission but still, some venues continue to ask for permission and in some cases, that permission is denied.

You cannot interview police or members of the military. Access to information requests are often delayed, denied, or heavily redacted (Although in Canada we face this as well). Often journalists go undercover or collaborate with strangers to get video or access to people they might otherwise be denied. Phones or pens become cameras in situations where in Canada, we could just call officials and tell them we’re on our way with a camera, tripod and lights.

While most of the journalists speak English, one does not. But we communicate through a translator. Sometimes though it’s not needed. I know what he means and what he wants. For all of us — we’re after the truth. We want to know why something is happening and inform the public to hold decision makers accountable.

This after all, is the role of a journalist. And that, is universal.