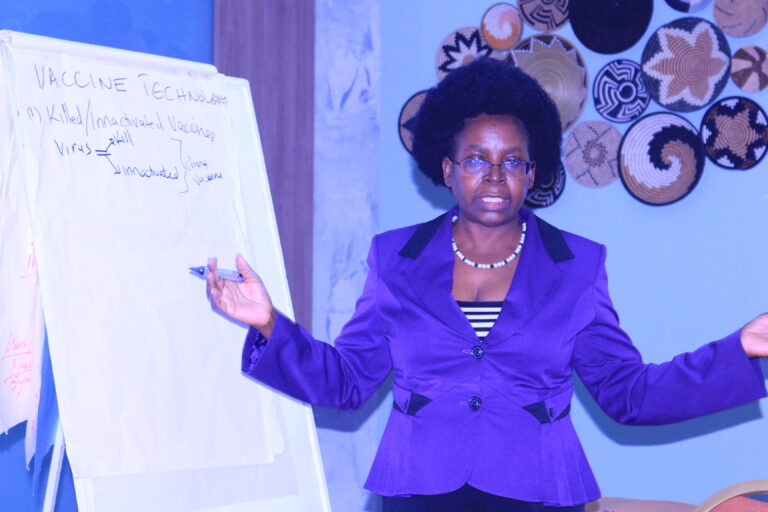 Dr. Musereno talked with the participating journalists about Covid19 and the technology behind vaccines. She explained that it is hard and highly regulated to get a vaccine on the market because it cannot be done without the approval of the World Health Organization WHO. ‘In Uganda’, she said, ‘we are developing our own and for future diseases, we shall be able to submit our own. Uganda has requested 2 vaccines for importation’. She noted that the people who get vaccinated will be protected from death and severe disease infection.

Robert Sempala noted that without free media, democracy is impossible because media holds the government accountable, exposes wrongdoings to alert the public, provides vital information on many things, and also provides a platform for public discussion of important local and national issues.

In times of elections, Mr. Sempala said that media is the voters representative, connects leaders and people, and is also the guardian of the public interest, warning citizens against those doing them harm.

Despite the provisions and good practices adopted by international organizations, Mr. Sempala says  there are many limitations imposed on media in various pieces of legislation among which include the penal code act cap.120, the press and journalists act 2000, the Uganda broadcasting act 2005 among others

However Mr. Sempala says that to have a free and fair media environment we need to carry out advocacy for the media, need to know that media is ones freedom, and start appreciating and getting engaged in issues that affect the media and lastly called upon journalists to speak out and raise alarm for themselves.

Paul Wasswa started with a brief on what CEHURD does to ensure social justice in health through litigation and handling cases related to health. They also have a program that empowers communities to seek accountability for their health services and use research to advocate for better services. CEHURDs main focus now is the impact of Covid- 19 measures on sexual and reproductive health where the majority of the people were affected because of the measures that the government took on like restriction of movements, curfew among others.

With a period of 2 months, total lockdown Mr. Wasswa said that Ugandans found themselves in unprecedented time noting that the biggest impact is because of the restricted movements there was a very big impact in access to health care services especially to the girls and mothers who were pregnant at the time. He says it was after civil service came together demanding for pregnant women to access health care services that they were considered but stressed that during that time there was a delay in offering the health service. Mr. Wasswa explained that during the lockdown sexual and reproductive health rights like access to proper health care, access to medication to family planning among others were affected.

After each speaker shared their expertise the journalists were able to ask questions about the vaccine strategy, the risk of herbal remedies, the impact of the lockdown measures on child mortality as health services were not accessible, how to support teenage girls, and the increasing teenage pregnancy rates and access to accurate information for the public among others.