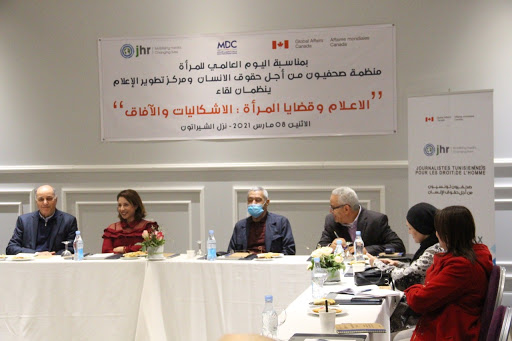 TORONTO, ON, March 22 2021 – With support from the United Nations Democracy Fund (UNDEF), Journalists for Human Rights (JHR) is launching an initiative in collaboration with local partners Sala Association in Morocco, The National Union of Journalists in Iraq, Awan Media in Lebanon and Ulysse F.M and Radio 6 in Tunisia to help foster an environment with greater accountability and governance, through journalism.

This initiative will look to advance media freedom and access to data and information, enhance the capacity for journalists to cover sensitive human rights related issues, engage underrepresented groups and ethnic minorities and provide journalists with the resources to improve their legal knowledge through strong working relationships with civic actors; specifically in a region overwhelmed with political corruption, the underrepresentation of marginalized communities in politics and media, and the mismanagement of national resources leading to an increased socio-economic divide, all which threaten any future democratic reform.

“Media is the first and most public check on the abuse of power.” said Rachel Pulfer, Executive Director, Journalists for Human Rights. “Public officials who make decisions based on facts and truth lead to better governance outcomes, stronger transparency and clearer accountability. And the sobering reality is that without a free media, societies lose the capacity for free thought. With that gone, all our other freedoms go too.”

The need for this work in the MENA region is urgent. As of March 2021:

∙       Ghaya Ben Mbarek from the independent Tunisian media platform Meshkal has gone on record to denounce the harassment she, as well as her colleagues received at the hands of police while covering the Tunis political protests in January 2021

∙       Lebanon’s official government media committee has blocked media stations such as MTV and Al-Jadeed by armed political powers from operating in districts.

With the implementation of this initiative, JHR in conjunction with its partners and the United Nations Democracy Fund looks forward to fostering an improved working environment for journalists, and ensuring the stories that reflect everyday life are reported in truth.

Our thanks to CNW for sponsoring this announcement

About Journalists for Human Rights