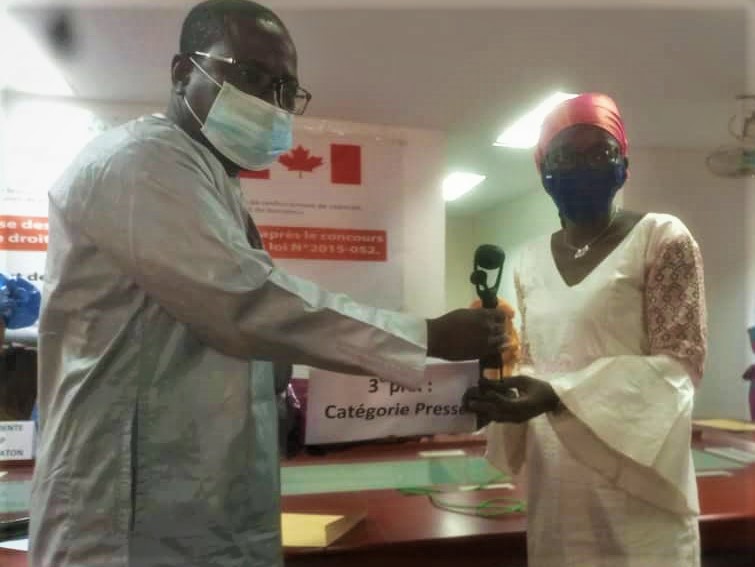 Aminata Sanago receives her award on December 18, which marked the

third anniversary of the introduction of Law 052.

JHR trained journalist Aminata Sanago has been awarded the prize for best article and blog by the Association of Women for Progress -AFP/Danayaton for her report ‘Quota law in Mali: women are still victims’. Aminata received training from JHR in September and was mentored through the National Endowment of Democracy-funded project ‘Amplifying Women’s Voices Through the Media to Promote Inclusive Democracy in Mali’.

The Association of Women for Progress -AFP ran a contest from November 15 to December 17 asking journalists and bloggers in Mali to draft pieces that help promote inclusion, empowerment, and respect for women’s rights by pressing decision-makers to take into account the implementation of Law 052, legislation that requires women to occupy at least 30 percent of elected or appointed officials in the National Assembly.

The award ceremony took place in Bamako on December 18, 2021, marking the third anniversary of the introduction of Law 052 in Malian parliament.

With over 250 press and blog articles submitted for review, Aminata’s was one of three top contenders for the prize. The article was published on November 17, 2021 in the Malian newspaper L’Annonceur with the support of JHR and NED in Mali.

Sanogo’s article investigated the political and institutional decision-makers’ non-compliance with Law 052. It gave voice to a multitude of civil society members who explained the obstacles in the implementation of Law 052 and proposed solutions to ensure its effective implementation.

Award winner Aminata was thrilled with the recognition: “This award is a great source of pride for me because it shows that I am improving and following the training I received from JHR on human rights reporting and the mentoring I continue to receive. So, I encourage JHR and its partners to continue with the training sessions and to support trained journalists so that they can better practice their profession — and to help change the mentalities on a large scale for the inclusion of women and girls in the political and public life in our country”.