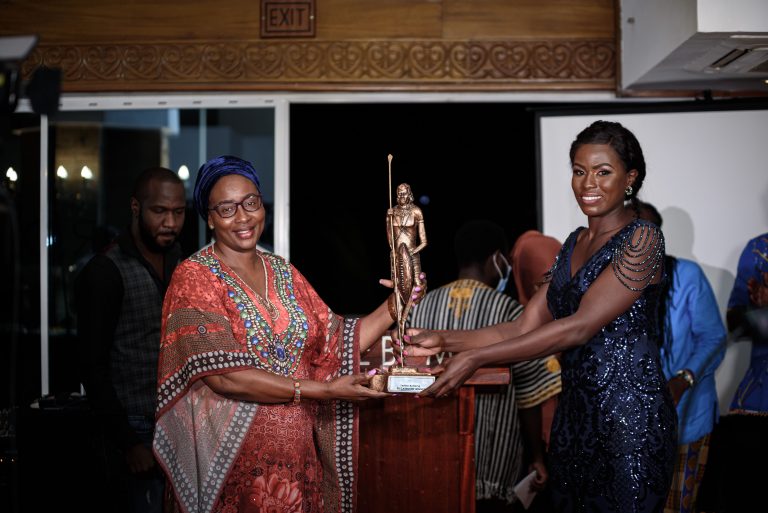 Journalists for Human Rights held its first annual human rights conference and media awards on December 9-10 at Nairobi’s Boma Hotel under the Canada World: Voice for Women and Girls’ Rights project in Kenya this year.

The awards held on the eve of Human Rights Day (December 10) marked the end of the two-day human rights conference that focused on ‘The Role of the Media in Advancing Women’s Inclusion and Participation in the 2022 Kenya General Elections’.

It was a night of glitz and glamour as media personalities, civil society, government officials, and members of the public gathered at the Boma Hotel to celebrate the winners of the inaugural JHR’s human rights journalism awards.

The awards focused on recognizing journalism on human rights issues, particularly those relating to women and girls’ rights in Kenya. The awards were open to JHR-trained journalists across the country. This year, JHR’s Nairobi office shortlisted 74 of 79 entries under the categories of print, TV, and radio.

Serfine Achieng Ouma, news anchor and reporter at the Kenya Broadcasting Corporation (KBC) emerged as the winner in the TV category for her three-part series feature titled “The Silent Pandemic.” Serfine also doubled as the overall winner thereby crowned the JHR Human Rights Journalist of the Year 2021.

Her story explores the untold suffering and trauma of women who are unable to conceive and have babies. “Involuntary infertility has a devastating impact on women across Africa. I particularly decided to tell the stories of women in rural Kenya who suffer constant stigmatization because of their inability to bring forth life,” said Ms. Achieng.

In her acceptance speech she describes the award recognition as a responsibility entrusted to her “This award is a responsibility and a challenge to use my gift as a storyteller to impact my society,” affirms Serfine.

Moraa Obiria from the Daily Nation, a publication of the Nation Media Group (NMG) was awarded for the best in the print category for her story titled “Inside the Kenya-TZ Cross Border FGM.” Moraa’s story investigates and analyzes the gaps in policies that continue to fuel female genital mutilation in the wake of a presidential pronouncement by President Uhuru Kenyatta to end FGM in Kenya in 2022. Moraa investigates how communities in Kenya trafficked girls to neighboring Tanzania to undergo FGM.

In her acceptance speech, Moraa emphasizes the role of journalists in advancing gender equality and inclusion. “This win is very important to me as I love writing stories that are impactful. I love to tell stories about how society can do better to make the world a better place for everyone. It’s our role as journalists to write stories that highlight the gaps that exist in the process of fighting for gender equality and trying to end gender inequality. This win means that I have to do a lot of work. I have to go out to do stories that are very gender-sensitive and gender-balanced,” Affirms Moraa.

Lina Mwamachi of Sifa FM-Voi emerged as the winner for the radio category for her story focusing on how inadequate water supply serves as an impediment to access to education for girls. The story delves into the challenge of water scarcity in Taita-Taveta County, Kenya, and its impact on girls.

Linah highlights this problem as a contributor to girls’ long stay at home and therefore missing classes compared to their male classmates since girls are not able to maintain hygiene while undergoing menstruation. She observes that the government has not been able to address the persistent problem. As a result of this story, the non-governmental organization that had made efforts to intervene has now scaled up its interventions after getting to hear the magnitude of the problem.

For Nancy Agutu of the Star Newspaper owned by Radio Africa Group, a runner up in the print category whose story depicts an education project in rural Kenya that provides a library for girls and access to reproductive health and sex education, the award is a win for girls whose lives have been impacted by her story. “For me, it means that the people I wrote about can see the impact the story had on their lives. She continues that “I am happy and excited with this award. My story on ‘Girls drawing river of life maps’ is a blueprint of what happens in communities that are untold,” she said. “The fact that these girls can picture and draw the future they want and how they want it is just amazing. My win is their win.”

The other runners up for the night were Nuru Mwalimu from Radio Rahma whose radio feature “Women’s leadership gets a boost in Coast region, Kenya” highlights the stereotypes that women aspiring for political office experience in the Coast region. It seeks to challenge and counter the notion that women are their own enemies and that they always work to bring down their own. Nuru interviews different stakeholders that include male and female voices to reinforce this message. Albert Mwanyasi from Sifa FM Marsabit was recognized as second runner up radio category for his report on how early marriages in Marsabit hinders girls access to education.

Jamila Mohamed, Managing Editor of Citizen Television Kenya and representative of the jury congratulated all the nominees and winners of the night. She assures all that the award evaluation process was thorough and fair. She said all the winners deserve their win while encouraging unsuccessful entrants to continue to do good journalism. Jamila lauded JHR’s media capacity-building program which provides training and long-term mentorship to journalists.

“My overall assessment of the awards was the tremendous growth I saw in the entries. Most of the stories were well told, well researched, and conveyed the intended message. As jury we could clearly see the fruits of the training that the journalists underwent, and it was commendable.”

She continued that “there is room for improvement, but I feel we are closer to achieving the goals. I wished for more entries from Television journalists, I do hope that in the next awards we will be able to incorporate more TV stories. An amazing learning experience it was to the jury too as we were able to look at some of the issues from the point of view of journalists who work closely with the community,” she said.

Meanwhile, Journalism Team Lead at JHR in Kenya Mustapha Dumbuya, says the award ceremony recognizes and celebrates JHR trained journalists who have demonstrated commitment to do reporting on human rights particularly issues affecting women and girls. He says “The award provides an opportunity for their work to be reviewed by eminent journalists in the industry and will gain a wider audience for their work.”

The jury comprises of: