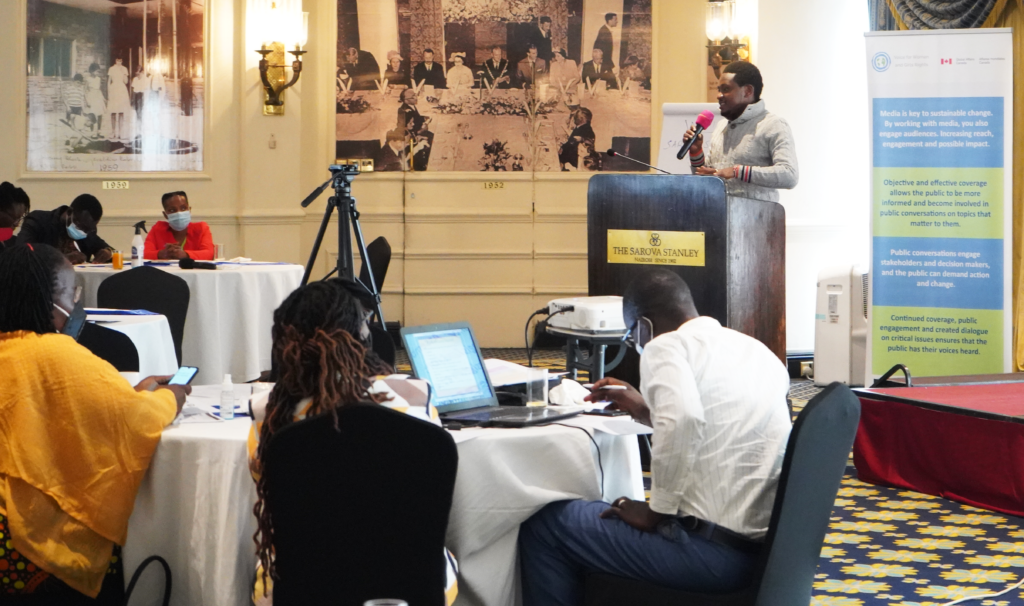 The Honourable Kabirou Mbugua, a member of the Nairobi County Assembly, said JHR played an integral role in enhancing the SGBV Bill that was passed into law on November 1, 2021.

Kenya capital Nairobi achieved a milestone in the fight against sexual and gender-based violence (SGBV) on November 1 when  Nairobi County Governor Her Excellency Anne Kananu signed the SGBV Bill into law.

The newly passed bill sought to establish an interconnected reporting and referral system that will guide SGBV survivors on where to seek help. Its overall role is to accelerate efforts towards the elimination of all forms of GBV in Nairobi County and ensure perpetrators are severely punished. The law also requires the county government to budget and fund safe houses for SGBV survivors and witness protection programs. This legislation is the first of its kind in Kenya, which saw a marked increase in SGBV incidents after lockdown measures were introduced during the COVID-19 pandemic.

At a roundtable organized by JHR on October 22, the Honourable Kabirou Mbugua, a member of the Nairobi County Assembly, addressed an audience comprising media, CSOs and decision-makers, and said that the county government seeks to holistically address SGBV by “promoting public awareness about its causes, impact, consequences and means of prevention.”

JHR has significantly supported the Nairobi government in this goal. Earlier in October, JHR organized a forum to discuss the SGBV Bill, formally known as Nairobi City County Sexual and Gender-Based Management and Control Bill, 2019. The forum brought together members of the Nairobi City County Assembly, officers from the Nairobi City County Department of Gender, Ministry of Gender officials, the media and various CSO representatives. Many valuable suggestions to enhance the SGBV Bill emerged from that meeting. JHR has also held numerous on-air forums and published articles on the need for improved services for SGBV survivors.

Important information would have been left out of the newly passed SGBV Bill had it not been for JHR’s efforts to convene major stakeholders, says Hon. Kabirou Mbugua

Speaking about JHR’s contribution to the newly passed SGBV Bill, Hon. Mbugua said, “The meeting organized by JHR provided a platform for popularizing the bill among members of the media and that made reporting of the bill by the media houses very clear.”

He added, “Some of the recommendations that were raised in the meeting were incorporated in the final bill that was enacted and signed by H.E Anne Kananu. This means that such information would have been left out of the bill had it not been for JHR’s effort to convene these stakeholders.”

Hon. Kabiro emphasized that the JHR forum provided a very rare opportunity for media reporters to interact with members of the county assembly. He said, “That process was very timely and very informative about the enactment of the bill. Such initiatives should be encouraged.”

JHR is committed to collaborating with the county government to support the implementation of the SGBV Bill by using the media to facilitate public education on the processes of the law and its implementation.

JHR’s Canada World: Voice for Women and Girls Rights program in Kenya works to build synergy and enhance cooperation between the media, CSOs and the government on policies that empower women in all aspects of life.