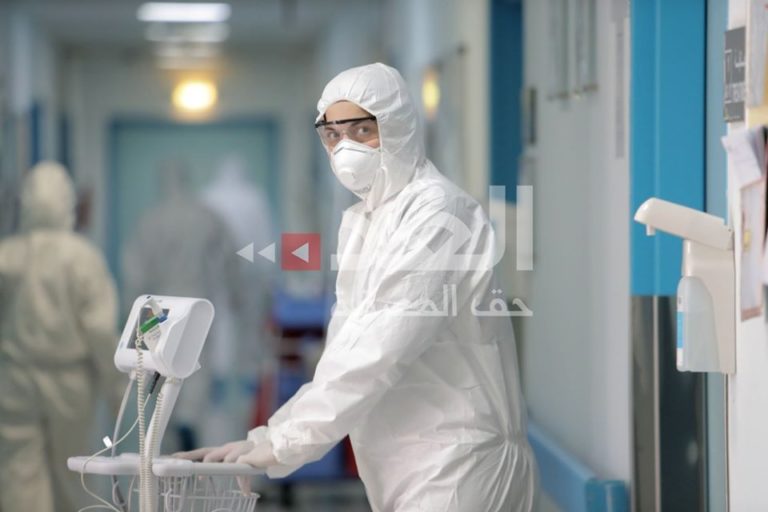 Amman – “An elderly woman died in March of Coronavirus. We were around her. She was alone, while her children were distributed in isolation rooms in hospitals of Amman and Irbid. She died without saying goodbye. It was cruel and painful, and we were helpless”. This is how Basheer Khasawneh, Chest Diseases and ICU Consultant at King Abdullah University Hospital in Irbid describes the most difficult moment for him and his fellow doctors, while caring for patients with the Coronavirus.

This scene summarizes the major challenges the spread of the emerging virus has imposed on doctors in particular, and on all health care personnel in general, who share their pain and fears with infected people.

The repercussions of the health crisis are not limited to the stress experienced by medical personnel in order to care and provide the necessary for the isolated patients, who are divided into two parts: infected with symptoms of the disease, and others with no symptoms. This burden deprives them of rest and a normal life, as well as psychological repercussions represented in anxiety that results from thinking about preventive and cautious measures while dealing with patients or suspected of infection, for fear of infection and transferring the virus to their families. This is what happens with Al-Khasawneh, despite his long experience in medical service for 30 years, the tension imposed by the conditions affected him so much that he started to live in constant fear of the virus getting out of control.

What the consultant most fears is the transmission of the infection to the doctors, because of their contact with the infected people, and other patients who come to the hospital, as it is possible that one of them is infected without discovering his infection, saying, “If one of us is infected with the virus, he will be isolated for 14 days in anxiety and waiting”, explaining that the majority of specialists assigned with supervising the medical staff, are in their fifties, the group that may be affected most by the virus, which requires more caution.

“The ongoing fear does not stop,” repeats Al-Khasawneh. Any suspicion of a hospital staff member being infected requires all staff to undergo examination, and waiting for the results is a psychological hell, as he described it, especially since it is repeated 2 to 3 times per week. The series of anxiety begins with the phrase “there is an examination of so-and-so”, and ends with the appearance of results after 12 hours of waiting, and separating the two stages a full memory tape plays in their mind of all work and activities with the suspect, for fear of contact with him and the transmission of infection to them in the event of proving his infection.

The consultant, together with two colleagues, is responsible for about 70 patients, exchanging concerns and problems with them in the hope of relieving their pressure on the continuous work and dissipating the fear that dwells in them while facing the spreading epidemic.

Muhammad al-Qaisi, a legal nurse and cadre trainer at Prince Hamzah Hospital, spent 40 continuous days taking care of those infected with the virus, after sending his wife to his in-laws, fearing transmission of the infection to him as a result of contact with his patients, and then to his wife.

The same reason prevented him from visiting his mother on Mother’s Day for the first time in 35 years. “It was difficult for me not to embrace her or kiss her, but I feared for her”, he says.

Al-Qaisi worked training medical personnel in the hospital since the virus first spread across the world, he trained 20 nurses and doctors on protocols to deal with isolation cases, how to enter departments and wear protective clothing, consisting of a complete white-colored suit, a full face shield, and virus mask, usable for 5 hours.

Al-Qaisi had experienced the same anxiety when a Coronavirus appeared for the first time in the world in Saudi Arabia in 2013, when he was working as a nurse there, and the same concerns occupied him that medical personnel are vulnerable to infection, or being assaulted by any patient or a person of his relatives, saying “We are psychologically alert, we are ready to accept anything that might harm our bodies or our psyche”.

Dealing with the Infected

Al-Qaisi does not leave the hospital except for a few hours, and sometimes he is obliged to sleep there, to be fully prepared upon the arrival of any infected or suspected case of infection, to wear his suit, and receive them at the hospital gate along with his colleagues, and accompany them to the isolation department, after which a series of examinations begin; blood pressure, temperature, and oxygen percentage in the blood. They ask questions about the family’s medical history, or the surgical condition of the infected person, to be followed by a series of checks and reassurance every hour.

That situation caused the nurse, who was the first volunteer to work in isolation departments, increasing psychological pressure, saying, “They isolate themselves from the world for 14 days, and they see no one but the suit that scares them. It seems difficult when they fear us, while we keep telling them that we are there to help them and give them medicines and treatment”. Despite Al-Qaisi’s understanding of this fear, their waiting for the results of the examination and their urgency to get out and their frequent questions about this matter, exhausts the medical staff, despite their understanding of it, as he put it.

After 14 years working in the intensive care unit, Al-Qaisi believes that the experience he gained from his work with the epidemiological team helps them to control the situation, and they continue to provide psychological and emotional support to the infected people, encouraging them not to think about the severity of it, to accept all the bad emotions, and reassure them, even if this means that the medical staff refuses to sleep, or naps for 2-3 hours a day for rest.

Nurses’ role cannot be separated from that of doctors who seek their full potential to support the team’s spirit. Both parties remain prepared to open any department in the hospital for isolation at any moment, and they continue to serve, knowing that the rate of infection is high, as the virus is small in size. A small incision one tenth of a Nano-meter – which makes a needle look big compared to it – in a suit or mask is enough to insert the virus into the doctor or nurse, according to al-Qaisi.

The head of Internal Medicine Residents at Prince Hamzah Hospital, Dr. Waddah Al-Jaafrah, agreed with Al-Qaisi on the difference of patients in their acceptance of the virus and the impact of this on their own morale. Yet, controlling the epidemic is their first concern, which drives them to carry out their usual work explaining the disease, the existing possibilities, work protocols, expected results, and raising patients’ morale, noting that it is bad for the patient to worry so much the doctor cannot calm him down.

The pressure on the medical cadres increases in crises, and their lives are full of tension, but their support for each other as one team, and people encouraging them reduces the stress of what they are going through. Still, they are in a similar case of isolation and separation from their families in applying the rules of social separation, so Al-Jaafrah and his wife were cut off from their families in Karak Governorate two months ago, and he prefers not to go to the stores and relies on deliveries of what he needs.

The doctor says that seeing families as a whole entering the isolation is very troublesome and exhausting, because medical personnel see them worried about each other, asking about the health of family members who are isolated in neighboring rooms, and being cut off from their relatives. “As for the death, it makes me imagine getting infected and then infecting my family; this is going to be undoubtedly very painful” he said. These observations are almost the most severe for Jaafrah, in addition to the deterioration of the patient’s health.

Al-Jaafrah heads a team of 45 resident doctors, who work under constant pressure to follow up on the infected, but the source of their fear is to transmit the infection to others. The doctor says they know more than others the dangers of the disease, to the extent they remember where they sat, who they mingled with, and what they used. They fully understand that leaving the hospital means contributing to the transmission of infection, while people are in their homes [, doctors announce that they are in hospitals.]

The Kingdom has 3 hospitals with isolation units, including Prince Hamzah, King Abdullah University Hospital, and Queen Alia, leading treatment and supervision operations in 10 different specializations. Any doctor can volunteer to work there, provided they are committed to the means of prevention, according to the spokesman for the National Committee for Epidemiology, Dr. Natheer Obaidat.

Dr. Ali Al-Obous, the head of the Doctor’s Union, points out that the union, in cooperation with the Ministry of Health, supports doctors, sensitizes them to the virus, and provides them with supplies, clothing, and disinfectants, in addition to conducting repeated checks, to prevent the transmission of infection from the doctor to his family, noting that psychological support occurs when extending thanks to them to motivate them. Nonetheless, difficulties exist because the doctor separates himself from his family, for fear of transmitting the virus to them, in addition to being cautious about mingling with other patients in the emergency, it is necessary to ensure his safety upon returning home.

Deputy Commissioner of the Nurses Union, Mohamed Kharabsheh, notes that infections may be transmitted to them from contact with infected people outside the hospital, despite taking precautions, especially with the increasing number of cases. The union tries to meet the nurses’ needs, confirming that they are carrying out field visits to hospitals, with the aim of providing psychological support for them, given the role of the psychological state during their work, especially since they are at the heart of the battle and in constant contact with patients.

24,000 doctors registered with the union work in the medical field, 15,000 nurses are distributed as follows: 11,000 in the Ministry of Health, and 4,000 in the private sector, according to both Obous and Kharabsheh.