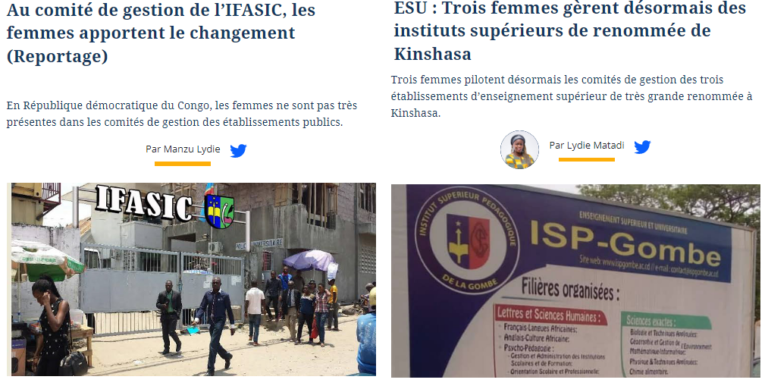 In the DRC, leadership positions at universities and higher education institutes are primarily occupied by men. Journalist and prominent member of the JHR-DRC network Lydie Matadi successfully shed light on this issue in a series of recent articles.

On September 27, Matadi wrote an article highlighting the achievements of the women members of the Institut Facultaire des Sciences de l’Information et de la Communication (IFASIC) management committee. While women occupy a few junior positions at the committee, their performance has been par excellent. In writing the article, Matadi hoped to demonstrate to the relevant stakeholders that women should be given fair opportunities to succeed in their higher education careers.

Two months after the article was published, on December 23, Minister of Higher Education and Universities Muhindo Zangi announced three women as Rectors and Directors General at the Higher Pedagogical Institute of Gombe and the National Pedagogical University. This was the first time women were chosen to serve these key roles at those higher education institutes.

In her follow-up article in April, Matadi interviewed Anastasie Masanga, the newly appointed Rector of National Pedagogical University,  who encouraged her female peers to aim high: “We need to come together to build together, create good networks that will allow us to occupy positions of responsibility.”

Matadi also spoke to different CSOs that welcomed this appointment. “These appointments are a recognition of women’s know-how, a testimony to commitment and political will. We want to improve the representation of women in decision-making positions at all levels and we welcome this. These are achievements that must be sustained. The percentage is still low. We, the media, will continue to advocate and raise awareness for Congolese women to be raised and considered. It is certainly true that the majority of competent women are still in the shadows,” said Rose Masala, executive director of the Congolese Union of Women in the Media (UCOFEM).