This article was published in The Toronto Star online 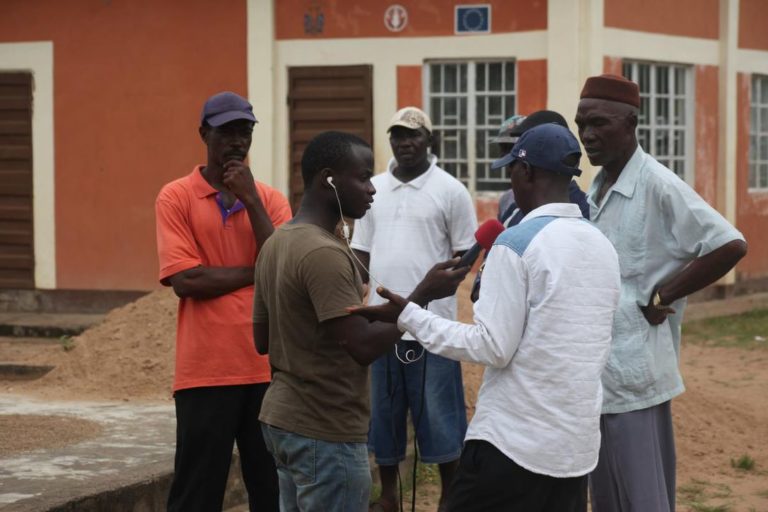 In such environments, journalists work to provide reliable information on how to stay safe and where to access care. This can mean the difference between life and death.

Never has this been more needed than in fighting COVID-19.

In Canada, both Ontario Premier Doug Ford and Quebec Premier François Legault have praised local media for their role getting public health messages out about the virus. In Ontario, media is now an “essential service.”

JHR staff are no strangers to covering pandemics. Two of the co-authors of this op-ed, senior trainer Mustapha Dumbuya and media literacy trainer Amara Bangura, both worked with local journalists to fight the Ebola outbreak in West Africa in 2014.

As we watched Canada’s response to COVID-19 slowly unfold, we realized one of the challenges, paradoxically, is Canadians’ relative lack of direct experience with pandemics.

In response, we’ve put together some pointers of what worked when fighting Ebola, and what local journalists and the general public can learn from such front line experience.

In a pandemic, authorities struggle to catch up with the virus’s rapid spread. Changing information about its behaviour causes public confusion on how to respond. Acting on the wrong information can be deadly.

The outbreak of Ebola in 2014 in Liberia and Sierra Leone sparked many irrational beliefs. Many believed that bathing in salt water could protect them from Ebola. In DRC in 2018-2019, people believed Ebola was a lie spread by Western health agencies to get funding.

In 2014, Dumbuya and Bangura covered the Ebola outbreak in Sierra Leone. The team worked with local community journalists for months to ensure they had the information needed to cover the crisis.

For Bangura and Dumbuya, the fight against Ebola was personal.

Both lost a significant number of relatives and friends to the virus. The impact is still being felt today.

When Ebola first broke out in Sierra Leone, local and international media prioritized counting the infections and deaths.

We see a similar pattern in coverage of COVID-19. Headlines are dominated by a count of the ill and dying, paired with stories profiling the latest public figure to test positive.

While it is important to document the pandemic’s spread, a lack of sufficient corresponding coverage on what communities and individuals must do to protect themselves only perpetuates paranoia. In a climate of fear, misinformation thrives.

Publishing information about people who survived the virus, and what their lives were like afterwards, helps quell stigma and allows people to envision a future.

In West Africa, local media worked to educate the public about the virus, influence behaviour change, and bring the spread under control.

Supported by JHR partner BBC Media Action at the time, Dumbuya and Bangura worked on a new radio show called “Kick Ebola na Salone” or “Kick Ebola out of Sierra Leone.” It wasdistributed to about 40 stations across the country. Through it, Sierra Leoneans received the latest reliable public health information on how to stay safe.

The segments “Rumour of the Week,” addressed misinformation about Ebola directly. The team engaged citizens spreading rumours on social media and by word of mouth, and took their concerns to health officials to be addressed or debunked.

In a health emergency, people bombarded with information about the crisis experience message fatigue. In Sierra Leone, we saw a trail of psycho-social problems which included traumatized orphans and stigmatized Ebola survivors. Months in, Sierra Leoneans were exhausted and needed hope.

In response, the team introduced a segment called “Survivor of the Week.” These stories aimed to reduce public fear, destigmatize those with the virus, and give hope to Sierra Leoneans that if they sought help early, they could get treated and be well again.

As COVID-19 wreaks havoc in Canada, a public education campaign that understands and prioritizes working with local media is critical.

But what is most crucial is transparent and honest information.