For those who care about racial equality, this has been one of the toughest weeks in living memory.
Protests calling for justice for the deaths of too many Black men and women at the hands of police, most recently George Floyd in Minneapolis, erupted across North America. While many of the protests have been peaceful, there have been many instances of looting and violence. And in too many places, police have responded with brutality, firing rubber bullets, tear gas and pepper spray into the crowds.
Anger, frustration and helplessness threaten to boil into sustained civil unrest.
In response to the moment, we at JHR were inspired by a powerful op-ed that JHR Ambassador and Raptors President Masai Ujiri wrote this weekend. We asked Masai if we could share it with you, JHR’s loyal community of support, and he encouraged us to do so – so here it is.
Please read it carefully and share it widely.

Masai Ujiri: To Overcome Racism, We Must Raise Our Voices 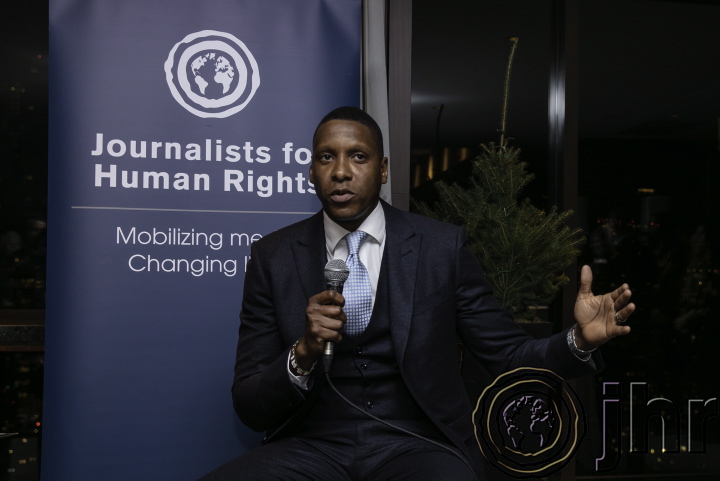 Masai Ujiri at JHR’s Night for Rights 2019 Photocredit: JHR
MASAI UJIRI
CONTRIBUTED TO THE GLOBE AND MAIL
PUBLISHED MAY 31, 2020UPDATED 2 HOURS AGO

The video was sent to me without explanation. Watching it, I was confused: What is this? At first, I thought it was from years ago and someone was sharing it to make a point. After all, there have been a lot of conversations recently focusing on interactions that ended with the violent deaths of black men.

I watched it again, and again, before I understood. This was new. It was a police officer choosing to place his knee on the neck of a black man until he was bleeding from his nose, and he lost control of his bladder, and then he died. It began right there on the street in Minneapolis, as people pleaded for his life and he asked for his mother. That man’s name was George Floyd, and he was 46. I know all that now.

But that morning, staring at my phone, I couldn’t understand how this could be. Wasn’t it just a few weeks ago that we were mourning the death of Ahmaud Arbery, a black man who was shot as he was jogging in Georgia? That we were shocked Breonna Taylor could be killed in her own home in Louisville, Ky.? The list grows, and things don’t change.

Ever since I first saw the video, I’ve been thinking about the cycle. A death like this happens, and we rage about it, and the headlines recede, and the world moves on, and then a few weeks later something else happens and we’re outraged again and then we move on, again. We have to stop that cycle.

No one can deny the police have a tough job. But they are peace officers. They are supposed to protect all of us. This is the profession they chose. I didn’t see any peace or protection when that officer had his knee on Mr. Floyd’s neck. I saw indifference. The “order” in “law and order” should not mean the deadly suppression of people of colour; it should mean preserving a society so we can all feel free and safe, to live in peace with each other.

We all came into this world the same way – as humans. No one is born to be racist and none of us sees colour at first. I believe there are far more good people than bad people, but sometimes the good must do more than simply be good. They must overwhelm the bad.

I can’t write about this issue without acknowledging what happened to me last June. It’s been widely reported, but I’ll summarize it again. Our team had just won the NBA championship and I was rushing to get on the court to celebrate. I was stopped, physically stopped, by a police officer, and the confrontation turned nasty. There’s a lawsuit that’s still before the courts – he is suing me – so I can’t say too much.

But I will say this: If it was another team president heading for the court – a white team president – would he have been stopped by that officer? I’ve wondered that.

Canada is my home, and I know we are not immune to the disease of racism here. But I know I also owe much to the United States, a country that has given me tremendous opportunities. However, my enormous gratitude is, at this moment, matched by an enormous sorrow for what America still needs to reconcile for all its citizens.

It has fallen to black people and leaders to speak out about the injustices – large and small – that we face. We are willing, and we continue do so in the great tradition of heroes such as Nelson Mandela and Martin Luther King Jr. and Muhammad Ali: black leaders who fought for people of all races, men who believed in universal justice.

The conversations we are having now on racism and inequality are about topics that I think are often sidestepped. Yes, I admit it can be difficult, but it is a conversation we need to have with our children, our neighbours, our co-workers, our classmates, our community and our leaders.

So many of you are asking: What can I do? There is a sense of helplessness, but that must not paralyze us. Your voice matters, especially when you are a leader or influential figure, and especially if you are white. Leaders have to be bold enough to state the obvious and call out racism.

The conversation can no longer be avoided because it is hard. We have to have it. Now.

At this time, there has been a lot of discussion about what it means to be an ally.

Personally, I’ve been reflecting on some comments Roxane Gay (author of Bad Feminist) made in her article for Marie Claire, “On Making Black Lives Matter.” In it, she notes:

“Black people do not need allies. We need people to stand up and take on the problems borne of oppression as their own, without remove or distance.

We need people to do this even if they cannot fully understand what it’s like to be oppressed for their race or ethnicity, gender, sexuality, ability, class, religion, or other marker of identity.

We need people to use common sense to figure out how to participate in social justice.”

I love her use of the phrase common sense, which tends to be the first thing to disappear in discussions of race.

Consider the conundrum of sexual violence. Somehow rape has historically been defined as a ‘woman’s problem’ — even though women, generally speaking, do not commit rape.

This is absurd. It puts the onus almost exclusively on those victimized by the problem to do something about it, while minimizing the responsibilities of those perpetuating it.

I am not saying here that it is appropriate to make this moment about white people. It is appropriate to centre, honour and respect the pain and fear that Black people are feeling this week and have felt throughout a difficult history.

However, as Masai puts it in his op-ed, this IS a time when white people, brown people, all of us, have a responsibility to step up, raise our voices, and make the situation right.

As with sexual violence, racial violence is actually a problem for all of us. We (and in this “we” I am emphasizing those who hold power in this society, whatever their racial or ethnic background but particularly those with white skin) have created, enabled, empowered and turned a blind eye to racist oppressive behaviour.

I hope the lesson we take from this moment is that it is up to all of us to change this situation. *Even and especially when it feels uncomfortable.*

The discomfort white folks feel in addressing these difficult topics, and actually doing something useful about them, can and should be channelled towards action. This action can help push for real change, change that dismantles the ways in which our society puts obstacles in the way of Black success and works to eliminate the fear factor Black people live with every day. For JHR, this includes centring Black journalists and community members and their experiences in our programming, in leadership roles on projects, and in our public engagement work in Canada.

White folks reading this, here’s one final but important caveat. Don’t expect to be embraced for doing your part. Some Black folks will never feel comfortable with white people meddling in their lives. In light of the history and present day reality, that is totally understandable. It’s also not the point. You do something to help dismantle racist oppression because it’s the right thing to do. Even when it’s hard, in fact especially when it is hard.

And right now, what you can do is raise your voice in support of those feeling pain and demanding justice for the Black community.

Rachel PulferExecutive DirectorJournalists for Human Rights
2020-06-14T10:56:50-04:00June 6th, 2020|Featured, Field Notes|Comments Off on Why #BlackLivesMatter at JHR and what we can all do about it